As Father’s Day approaches, we want to re-share a story originally written by journalist Lee Woodruff about Bart’s recovery. Lee is a popular speaker and the author of three best-selling books, and her distinctive voice comes from the heart. Whether she’s sharing wisdom about the healthcare journey and recovery or speaking candidly about life and family, she draws on her experiences to connect with the audience. We hope you’ll enjoy her words and find inspiration and hope in Bart’s journey. 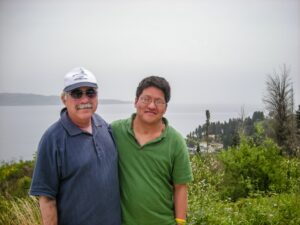 ON THE EVE OF FATHER’S DAY – A FATHER’S DEDICATION

At a certain point in life, all of us will experience loss, grief, and disappointment. We will all be tested, all end up downstream or upstream of where we set out to sail. The truth about life is that none of us truly has our hands on the script.

It’s not possible to rewind the tape; no matter how much time we spend fantasizing about it with our head in our hands. In the end, it all comes down to a matter of mental longitude and latitude. And a great deal of perspective. You have a simple choice when everything is said and done. You can get bitter, or you can get better.

The one common denominator in the truly remarkable folks I’ve had the pleasure of meeting is their desire to not let circumstances define or circumscribe them. One of the greatest gifts of being a survivor is the ability to take your situation and use it to illuminate the way for others.

This father and son team is one of those dynamic duos. And I hope as we head into Father’s Day, that their story inspires you the way it did me:

When Joel and Dayle Goldstein traveled to the JFK airport lounge in 1985 to retrieve their new adopted son Bart from the Korean escort, her words to them were prophetic. “Here’s the strong one,” said the frazzled woman, after the long plane ride with the energetic infant.

At five months he could already stand and cruise and when, at age six, his baby sister Cassidy arrived at JFK, he was primed to be a doting brother. Two Korean children, adopted by white Americans, one Jewish and raised Greek Orthodox, Bart describes them as “destined to be a true melting pot example of American life.”

Bart was an A student, an intense and indestructible competitor in sports, and full of energy and fun. “He was a dogged defender,” says Joel, “not at all shy about taking a hit. His opponents just careened off of him.”

In 2001, all of that came to a screeching halt. Bart had been out for a joy ride on the back roads near their upstate New York home with two other sixteen-year-old friends when their car plowed into a tree. The Goldsteins got the call that no parent wants to imagine. Their son had been medivaced 100 miles away and was on the operating table, undergoing life-saving brain surgery. The Goldsteins immediately set out for the hospital. When the couple was finally able to see their son in recovery, he was so unrecognizable, they were only able to identify Bart by his feet.

Following his emergency surgery, Bart was in a coma for a month. Joel and Dayle, like millions of other civilian and military families in this country, were plunged into a completely alien universe, the macabre fun-house world of traumatic brain injury (TBI).

Joel describes three months of hell, when, after waking from his coma but barely conscious, Bart was taken to the rehabilitation hospital. Ten weeks later, he began to speak. After that, he worked on moving his right leg. It was all painstaking baby steps at first, but each of these tiny achievements felt like leaping a mile forward.

While his son’s losses were staggering, Joel chose to cling to what he could see as progress, despite the fact that both the school and hospital felt Bart would be better off in an institution.

As a TBI patient, Bart was in a fog at first and easily exhausted. Even the tiniest exertions sapped his energy for the rest of the day. His speech was mumbled and plodding, and as so often happens with a brain injury, inappropriate behaviors emerged.

Bart’s social world began to reconfigure itself, lifelong friends and even family began to drift away, confused and unable to relate to the “new Bart.” Joel and Dayle tried to come to terms with the fact that they had lost “old Bart” in the auto accident and needed to learn to relate to what they referred to as “the stranger in their midst.”

“Living with a TBI survivor is like living with a Jack-in-the-Box,” describes Joel. “Crazy is always just a half-turn away.”

Each of the Goldsteins describes themselves as “walking wounded.” The tragedy has reached out and cinched them all in. A brain injury never simply affects the patient. It sabotages everyone in the family the way a pebble ripples out when dropped in a pond. Dayle still feels anxious driving in cars, Cassidy mourns the loss of the close relationship she had with her brother and all these years later, Joel suffers insomnia.

But there is hope with Bart’s story. And there is progress.

When asked to describe how they got through this surreal period of their lives, Joel answers “the conspiracy of decency: kind, generous people who lightened our load. They seemed to spring up in the knick of time when we needed them most urgently.”

Little by little, in the incremental steps that are the hallmark for anyone dealing with a TBI, Bart made progress. Bart underwent numerous therapies including cognitive therapy, vision restoration, hyperbaric oxygen, craniosacral therapy, sensory learning, neurofeedback, high-dose Omega-3 fish oil, and counseling to help in the acceptance of new realities. He took two extra years to graduate high school, gradually mainstreaming from Special Ed to regular classes. Today, at 29, Bart is semi-independent and working in a restaurant. He has also been able to move out of his parent’s home, which is a major milestone.

“The accident transformed Bart’s life,” says Joel. “He missed out on many experiences during his youth that would have helped him grow up. He understands he’s not as mature as he should be.”

It also transformed Joel’s life and provided him with a very focused mission. He is an eloquent public speaker and a tireless advocate for the brain injured and caregivers everywhere. In order to help others traveling along the very same road, Joel wrote his first book, No Stone Unturned, as a helpful and hopeful guide for the journey to recovery.

“There is no royal road to recovery,” says Joel. “There is just a toolbox with lots inside, and it’s always handy: prayer, community support, the ‘fellowship’ of TBI, and of course, thinking outside the box. Sharing what we’ve learned is the best way of making sense of it all.”

Today, Joel describes his son as a lively charming young man, living on his own, with new friends, and a new life. The Goldsteins are one of the so many families who demonstrate how we can all come through even the most horrific experiences and find the resilience within to pull us through.