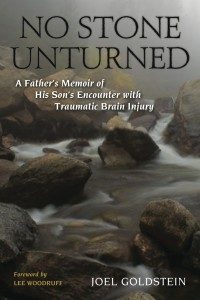 Bart Goldstein was only sixteen when he suffered a traumatic brain injury (TBI) in a car accident in 2001. No Stone Unturned is the saga of Bart’s struggle to regain his life. Told from his father’s point of view, the book chronicles the family’s ordeal, and flashbacks fill in Bart’s life since he arrived from Korea at the age of five months. Considering every possibility in their search for remedies to Bart’s catastrophic injuries, the Goldsteins explored several promising alternatives, including craniosacral, hyperbaric oxygen (HBOT), sensory learning, nutraceutical supplementation, neurofeedback, and vision restoration therapies. Bart’s remarkable recovery resulted from a combination of conventional medicine and alternative and emerging therapies.

TBI has now become the “signature injury” for thousands of wounded warriors returning from Iraq and Afghanistan; No Stone Unturned offers profound insights into what survivors and their families may face. Anyone struggling with this “invisible” disability will find the book insightful, inspiring, and useful. Its message, full of humor and practical techniques on navigating life’s toughest challenges, provides a thoughtful hand-drawn map for the journey which, inevitably, so many of us must travel.

Joel Goldstein is a retired transportation and logistics executive. He is also an adoption advocate and activist, having served for many years on the international adoption board of Albany’s Parsons Child & Family Center and of Camp Mujigae, the largest Korean heritage camp in the United States. Founding President of the Southern Ulster Branch YMCA, he served on its board as well as the board of The YMCA of Kingston and Ulster County. Joel resides in the Albany area with his wife, Reiki Master Dayle Groudine. They are the parents of two beautiful adopted Korean children, Bart and Cassidy.

Their family’s journey led to the creation of the non-profit Brain Alternative Rehabilitation Therapy (BART) Foundation. Joel and his fellow advocates work to promote awareness of alternative treatments for traumatic and other acquired brain injuries (TBI/ABI). 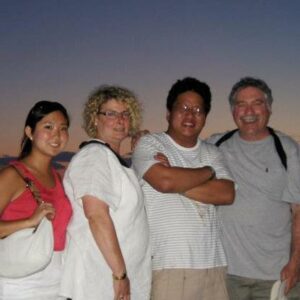 What readers had to say about No Stone Unturned…

“Professionals and the lay public will be equally captivated as the neuroscience of TBI leaps into stark humanity in the pages of this superbly written, fascinating story. This book should be added to the medical student curriculum nationwide.” —Randolph S. Marshall, MD, MS, Elizabeth K. Harris Professor of Neurology, Chief Stroke Division, Department of Neurology, Columbia University Medical Center

“No Stone Unturned exemplifies the faith, tenacity, and energy of a single family confronting a tragedy both unexpected and life-altering. Readers will find they become physically and emotionally trapped within its pages, but with no desire to free themselves. Son Bart’s traumatic brain injury, as well as his family’s determination to minimize its effects, serve as a primer for families confronting the complexities and hurdles that always lie in wait for those most in need.” — Rear Adm. Ray Smith, USN (Ret.), former commander, U.S. Navy SEALs

“Since my fifteen years in the AFL and NFL, traumatic brain injury has emerged as an important concern for current and former players. No Stone Unturned tackles this important and timely issue. Joel Goldstein does us all a service by sharing his family saga in a beautiful, inspiring way. A must-read.” —Winston Hill, member, 1968-1969 New York Jets, Super Bowl III champions

“In a voice that is sometimes wrenching, often comic, always fully human, Joel Goldstein brings us into the world he and his network of family and friends learned to navigate in the quest to help his son, Bart, recover from traumatic brain injury. No Stone Unturned shows how well the system can work when families and professionals unite in the journey that is TBI rehabilitation.” —Jan Stivers, professor of special education, Marist College, Poughkeepsie, New York, and co-author of A Teacher’s Guide to Change (2009)

Additional TBI/ABI articles authored by Joel can be found in Brainline Magazine.

I want to donate!