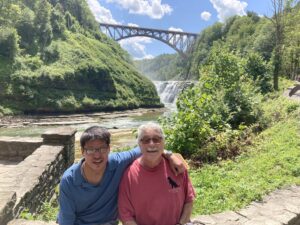 Traumatic brain injury (TBI) is the most common form of acquired brain injury. It occurs when a sudden trauma causes damage to the brain. TBI can result when the head violently hits an object, as in a car crash, or when an object penetrates the skull and enters the brain as in a shooting. Symptoms of a TBI can be mild, moderate, or severe, depending on the extent of the injury to the brain. For a detailed breakdown of the causes and symptoms of TBI, read this Mayo Clinic overview.

Far and away the leading cause of death and disability among persons under the age of 45, TBI strikes 1.7 million Americans each year, with over 50,000 dying of their injuries. In addition, the CDC estimates that 5.7 million Americans are permanently disabled with Traumatic Brain Injury – roughly 2% of the population! Millions more whose injuries do not quite meet the rigorous standard of legal disability struggle with life-altering deficits.

No one is immune: Toddlers on the playground, young adults out for a joy ride, weekend warriors on their mountain bikes, and seniors on stairs. However, falls are the single most significant single cause of TBI – 40%, comprised mainly of the youngest and oldest among us. Children and young adults predominantly suffer sports-related concussions or other brain injuries, as well as auto accidents. In the middle decades, we are most likely to be involved in a motor vehicle accident or an assault. Older persons are the most likely to succumb to their injuries. Overall, men are three times more likely to die from an injury than women.

The other large class of acquired brain injuries is non-traumatic acquired brain injuries, the vast majority of which are strokes. A stroke occurs when the blood supply to part of one’s brain is interrupted or reduced, preventing brain tissue from getting oxygen and nutrients. Brain cells begin to die in minutes. There are two leading causes of stroke: a blocked artery (ischemic stroke) or leaking or bursting blood vessels (hemorrhagic stroke). For a detailed breakdown of the causes and symptoms of stroke, read this overview from the Mayo Clinic:

Over 800,000 Americans suffer a stroke each year, with 130,000 dying. Remarkably, 34% of stroke victims are under the age of 65. Including stroke, TBI, and other forms of acquired brain injury (such as aneurysm, drowning, drug overdose, poisoning, smoke inhalation, carbon monoxide poisoning, heart attacks, etc.), brain injuries represent one of the top public health challenges. An astounding 2.5 million injuries per year at an annual cost of care of approximately $110 billion – 25% more than the cost of care for people with cancer! Brain injury is often a lifelong challenge for survivors, families, and loved ones.

Conventional medicine takes survivors of severe ABI only so far, often ending at the nursing home door or heavily medicated at home, facing long empty hours and overwhelming family resources. Safe alternative therapies are not merely a reasonable option; they may be necessary.

Every one of the millions of persons who suffer an ABI begins a journey none of us would choose to take, yet millions inevitably will. The BART Foundation provides, in an accessible form, knowledge of safe alternative therapies for brain injuries– which ones are likely to help, where they can be found, and how to afford them. We are dedicated to assisting survivors in living more fulfilling, productive, and joyful lives. Our outreach includes survivors, caregivers, and health professionals.

I want to donate!