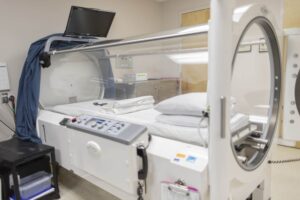 The BART Foundation aims to promote better outcomes for brain injury survivors by answering three questions – which alternative therapies are likely to work, where can they be found, and how can they be afforded? One of the ways we fulfill our mission is by carefully watching global research and clinical trial outcomes and sharing that information, in user-friendly language, with the TBI/ABI community. HBOT is one of the safe, alternative therapies the BART Foundation believes may help brain injury survivors. Perhaps if HBOT becomes more widely accepted as a treatment option, TBI/ABI/PCS survivors will be able to gain better access to this life-changing treatment.

We wanted to share this recent research article published in Nature about research regarding the effect of hyperbaric oxygen therapy (HBOT) on children (age 8–15) with post-concussion syndrome (PCS). The aim of this study was to investigate the clinical curative effect of HBOT and its mechanism in improving dysfunction following traumatic brain injury (TBI) in children and adolescents.

Persistent post-concussion syndrome (PPCS) is a common occurrence in the pediatric population following traumatic brain injury. Mild TBI accounts for over 90% of all TBI in children, affecting more than 10% of children under the age of 16. Although most children recover completely in a short period of time, about 10–30% suffer from PPCS, lasting from months to years. PPCS has a significant effect on a child’s quality of life, school performance, family function, and activities.

Recent studies have shown the beneficial effects of HBOT in PPCS adult patients. This randomized, sham-control, double-blind trial evaluated the effect of HBOT on children (age 8–15) suffering from PPCS from mild-moderate TBI events six months to 10 years prior. Twenty-five children were randomized to receive 60 daily sessions of HBOT (n = 15) or sham (n = 10) treatments.

Following HBOT, there was a significant increase in cognitive function, including the general cognitive score, memory, executive function, PPCS symptoms, emotional and behavioral symptoms, hyperactivity, and planning/organizing. Clinical outcomes correlated with significant improvements in brain MRI microstructural changes. The study suggests that HBOT improves both cognitive and behavioral function, PPCS symptoms, and quality of life in pediatric PPCS patients at the chronic stage, even years after injury.

The study has several limitations worth mentioning. First, the sample size is limited, as the researchers were unable to recruit the needed number of eligible patients in four years. The main reason was parents refusal to have their child participate in a sham-controlled study. Parents mentioned that after reading both the literature and the study’s consent form containing available data on HBOT effects in adults with PPCS, they did not like the 50% chance of sham treatment. However, the presence of significant changes seen in a small group suggests the high potency of the intervention. Second, up to a third of patients used ADHD-related drugs, which were not an exclusion criterion as long as the medications were unchanged. However, these medications can play a role in both cognitive function and behavior symptoms. Third, the duration of the effect is yet to be determined in long-term follow-ups.

Moving forward, additional data is needed to optimize the protocol and to characterize the children who can benefit the most from HBOT to address PCS/PPCS.