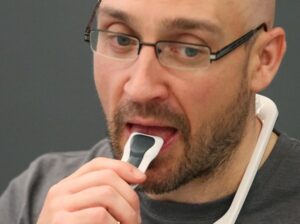 Isaac Kohtakangas uses the PoNS device during a rehabilitation session in Calgary, Alberta.

The BART Foundation’s mission is to promote better outcomes for brain injury survivors by answering three questions – which alternative therapies are likely to work, where can they be found, and how can they be afforded? One of the ways we fulfill our mission is by carefully watching global research and clinical trial outcomes and sharing that information, in user-friendly language, with the TBI/ABI community.

A recent research article published in Frontiers in Human Neuroscience, involved thirty-seven healthy volunteers randomized to receive simultaneous translingual neurostimulation (treatment) or no translingual neurostimulation (control) while undergoing cognitive skills training. Cognitive training was conducted for two 20-min sessions (morning and afternoon/evening) over 3 consecutive days. Brain vital signs were evaluated at baseline, Day 1, and Day 3. Analyses focused on cognitive processing as measured by N400 brain vital sign cognitive response during cognitive skills training in healthy individuals.  As a result of translingual neurostimulation, those in the Treatment Group showed a stable N400 response over the study duration, while those in the Control Group showed a significant decrease in response size; in other words, the Treatment Group demonstrated markers of increased sustained attention and improved cognitive vigilance.

Anecdotal reports from previous clinical studies have suggested incidental improvements in cognitive function using PoNS.  The outcome of this study builds upon previous research in showing that translingual neurostimulation using PoNS led to a sustained N400 response during cognitive skills training, as measured by the brain’s vital signs framework.