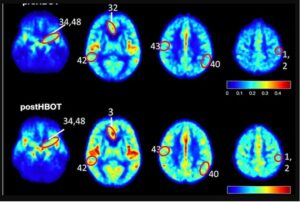 Hyperbaric Oxygen Therapy (HBOT) is one of the safe, alternative therapies the BART Foundation believes may help brain injury survivors. In this September 9, 2021 article by Maayan Jaffe-Hoffmann for the Jerusalem Post, the positive findings of a research study, which combined the use of HBOT in the treatment of animals genetically engineered to develop Alzheimer’s and a group of individuals over the age of 65 who were already having memory loss, have been published.

For the first time, a non-pharmaceutical clinical trial has proven effective in reversing the main activators of Alzheimer’s disease, according to Tel Aviv University’s Prof. Shai Efrati, whose study on the use of hyperbaric oxygen therapy (HBOT) to improve brain function was published Thursday in the peer-reviewed medical journal Aging.

The study, which combined use of HBOT in the treatment of animals genetically engineered to develop Alzheimer’s and a group of individuals over the age of 65 who were already experiencing memory decline – the stage before Alzheimer’s – yielded several positive results. These included improvement in vascular function, of blood flow to the brain, memory capacity, attention and information processing speed, as well as a drop in brain amyloid load.

In Israel, HBOT is already used for other indications and is known to be relatively safe when managed by a medical professional. A previous study by Efrati and a team from Shamir Medical Center in November found that when healthy adults over the age of 64 were placed in a pressurized chamber and given pure oxygen for 90 minutes a day, five days a week for three months, not only was the aging process delayed – it was actually reversed.